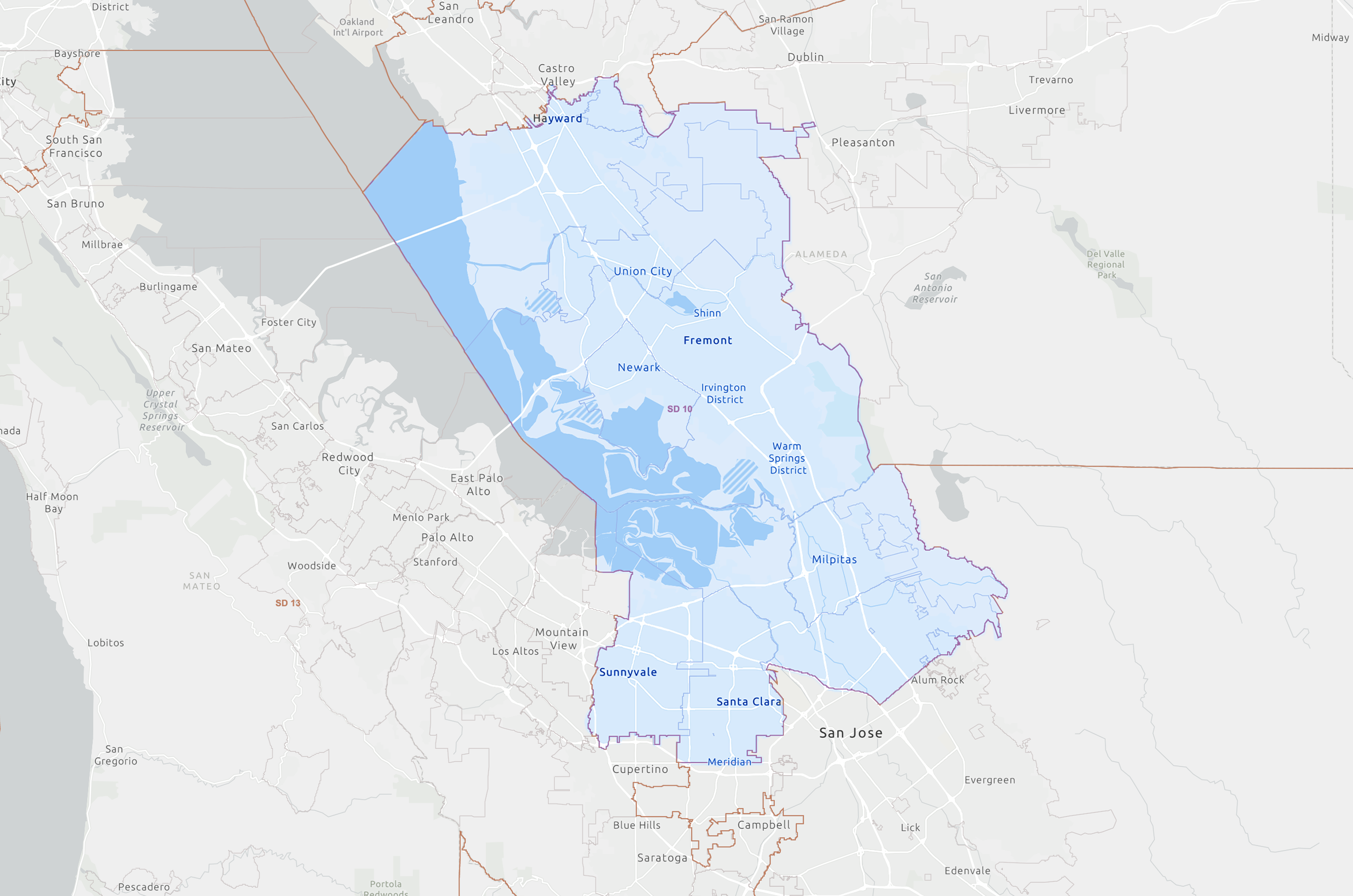 The primary election for Senate District 10 is coming up on June 7th, 2022. The district encompasses Hayward, Union City, parts of Dublin, Fremont, Newark, Milpitas, Santa Clara, and the northwest half of San Jose. The seat is currently held by Senator Bob Wieckowski, who is leaving the position after seven years of service.

We’ve evaluated candidates according to our candidate assessment criteria and consider the following components in our selection process:

In the upcoming primary election for Senate District 10, our recommendation is to vote for Aisha Wahab.

Cities within Senate District 10 like Hayward and Fremont have been growing to accommodate the influx of tech workers who long for more space and comparatively affordable rent and home prices but are still within reasonable commuting distance to the core of Silicon Valley. Historically, the region has been home to blue-collar and industrial workers, but the region is struggling to maintain its affordability as the region rapidly grows.

As Mayor Pro-Tempore of the City of Hayward, Aisha Wahab has been a fierce advocate for housing affordability and renter protections. Alongside the Hayward City Council, Wahab has helped increase the number of affordable rental units from 1,000 to 10,000, adding sorely needed housing. During a town hall hosted by Silicon Valley at Home (for which TechEquity Action was a co-host), Wahab advocated for the preservation of affordable housing units and the need to protect and expand the rights of tenants to stabilize families in their communities. In addition to this, Wahab proposed the Emergency Stay in Place ordinance in 2020, to stabilize tenants and help mortgage-holders and small businesses in the community during the coronavirus pandemic. The urgency to secure families at risk of displacement remains as the pandemic rages on. We applaud Wahab’s commitment to addressing the need through a multi-pronged approach that follows what housing advocates refer to as the 3P’s framework—protecting tenants, preserving existing affordable housing, and producing additional housing.

Wahab has also shown accountability when she has made mistakes and that she is responsive to  feedback from the community. Wahab was at the center of a controversial decision to grant a developer an exemption from a tenant protection ordinance so that they could convert existing units to affordable housing. When the plan resulted in evictions, Wahab acknowledged her error and urged the Council to revisit the decision. We are encouraged that Wahab demonstrates the ability to listen to her constituents, prioritize the needs of those who are most marginalized, and find remedies that support our core values.

When it comes to fighting for a living wage, Wahab has shown a commitment to standing up for her community even when it may not be the most popular choice. In a tough vote, Wahab opted to support a proposal to raise the minimum wage voting in favor of extending a previously-promised $2 an hour raise, going against her colleagues on the Hayward City Council who had the majority in opposing the change. Although Wahab was outvoted, we support Wahab’s courage to take bold stances on decisions that support a living wage for families. If elected, we hope to see her undertake this strong approach when addressing labor protections to ensure good wages, benefits, and working conditions for Californians.

For these reasons, we believe that Wahab’s approach to addressing the housing crisis and her ability to advocate for workers’ rights will be an asset to the Senate and will advance economic justice in our state.